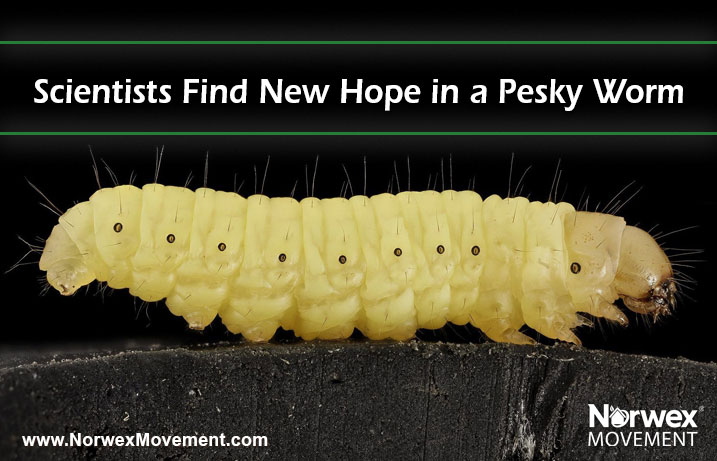 The Worm that Ate a Mountain of Plastic

It sounds a little like the plot from an old horror movie—Monster Worms Devour Everything!

Well, not quite everything. This worm actually prefers feasting on yummy beeswax to human flesh. You see, the larvae of the wax moth normally live on beeswax. This insatiable craving has made them enemy #1 for most beekeepers.

But a chance discovery has revealed this worm also has a taste for more than just wax. They enjoy noshing on plastic! And so, this revelation may offer a way to make plastic waste biodegradable.

It all started when Dr. Federica Bertocchini, a researcher at the Spanish National Research Council, and scientists at Cambridge University removed an infestation of the worms from one of her beehives. After getting them out of her hive, she put them aside in a plastic bag. Later, she returned to make a shocking discovery—the worms had eaten their way out of the plastic bag!

So Far, So Good

This led Bertocchini to investigate the feeding habits of the worms. In lab tests, she found that 100 worms can consume up to 92 milligrams (about the size of two aspirin) of polyethylene in as little as 12 hours. With such a voracious appetite, these little worms could be put to good use gorging on plastic waste.

Paolo Bombelli, a biochemist at Cambridge who also took part in the study, said these findings could lead to a potential solution to the plastic waste that is mounting up in our waterways, oceans and landfills.

One possible way to reduce the plastic waste could be to breed large enough numbers of the worms and just turn them loose on the plastic. But this solution may be viable only if the worms have an endless appetite for plastic.

Bertocchini and Bombelli hope their findings might help make plastics biodegradable in landfills, as well as those scattered throughout our oceans.

Polyethylene is one of the most commonly used plastics globally. Each year, the average person uses more than 200 plastic bags, which can take between 100 and 400 years to degrade in landfill sites.

In the oceans, plastic waste breaks down into small particles, which pose a serious health risk to the fish that ingest them. Each year, some eight million tons of plastic waste plastic from around the world ends up in the ocean.

Scientists are continuously searching for ways to break down plastics. Find out what other research is being is being done today.

Have you found stories about how science is working to help reduce pollution? We’d love to hear about them. Just drop us a line in the comments below.

Would you support the propagation of wax moths to help reduce plastic pollution?
Yes:
76%
No:
24%
Total Votes:
179

17 Comments on "Scientists Find New Hope in a Pesky Worm"