How One Nine-Year-Old Dares to Make a Difference 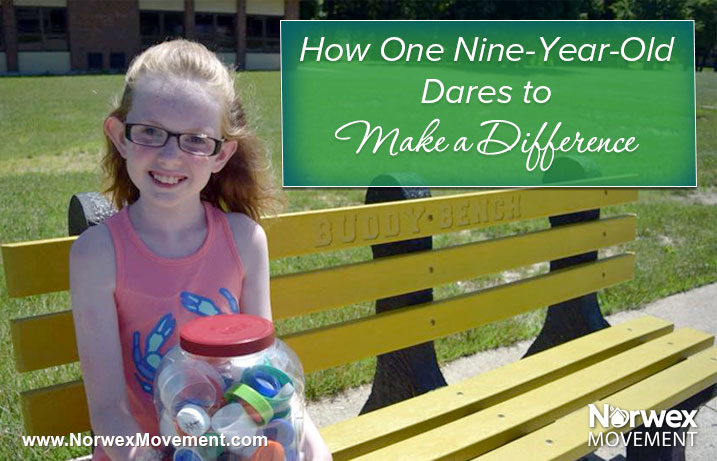 Update from the Buddy Bench: A Welcome Site for Lonely Kids

Recently we heard from Heidi Vance, Norwex Movement member and proud mom of Sammie, the little girl with a huge heart for others. Sammie collects plastic bottle caps and lids which are recycled into Buddy Benches and sent to schools throughout her home state of Indiana. By sitting on a Buddy Bench, kids who may be feeling lonely or left out during recess can signal that they would like a friend to play with.

Sammie was just eight years old when her mom first reached out to us. Now she’s nine, and Sammie has amassed quite a following—along with some heartwarming updates from her mom:

These benches are made completely out of recycled bottle caps.

Says Heidi, “Now 75 Indiana schools will be getting a Buddy Bench free of charge thanks to Walgreens! On September 15, Walgreen’s brought the caps down to Green Tree Plastics, the place that makes the benches from the recycled caps and lids. When Sammie collected for her benches, she needed 400 pounds of plastic caps for one six-foot bench. But recently, Green Tree changed the requirement to only be 200 pounds so that schools and groups can reach their goal faster! Same great bench but Green Tree is matching the 200 pounds!”

Sammie’s words to live by:

Want to help Sammie make a difference? Check out Sammie’s Buddy Bench Project on Facebook and request to join the group. Or, to donate to this cause, click on Sammie’s go fund me page. And please share your thoughts about this program in the comments below!