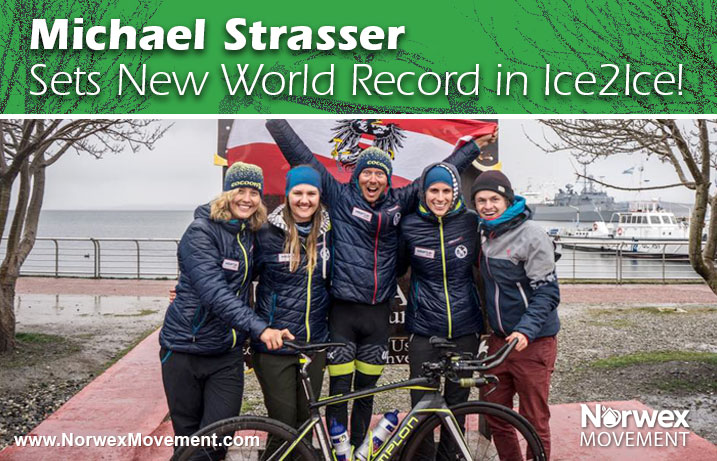 After cycling for more than 24 hours straight, Michael made it!

At approximately 9:05 a.m. on October 16, 2018, I witnessed Michael Strasser making his way to the final destination of his 84.5-day journey—the “End of the World” sign in Ushuaia, Argentina. Known as the southernmost city in the world, Ushuaia is part of the Patagonia region.

What an amazing experience to watch Michael Strasser break the world record for bicycling from Alaska to Patagonia—15 days earlier than the previous record holder no less!

I had the privilege of seeing the pure joy that Michael and his team experienced, their gratitude for each other, and how overwhelmed they were to be finished. I actually don’t think they really believed it was over. How could they? Day in and day out for 84 and a half days, through rain, snow and the occasional llama crossing, their lives had been completely focused on this one, singular goal.

What stood out to me most was the camaraderie of Michael’s ground team. They all took part of this special accomplishment together and celebrated together—from Kerstin, the project lead, to Viktoria, the project coordinator, to Viola, the physical therapist, to Samuel, the cameraman, each had a role. And yet, everyone pitched in wherever needed to make the tour a success, like desperately searching for an Internet connection when there was hardly one to be found, or finding the sparsely located gas stations to fill up.

While I can only imagine that they were all exhausted beyond comprehension at the finish line, they were all so gracious and enthusiastic when I met them there, immediately inviting me to join in their celebration.

It was a great pleasure to meet Michael and his team, a joy to present him with a $14,000 check to help find a cure for ALS, which was raised with the help of our Norwex Consultants, and an honor for Norwex to partner with him on this incredible feat.

To hear more about how Michael felt after finishing his world record-breaking tour, watch the video below.

Andrea, thank you so much for bringing back this incredible story and interview! We are all so proud to have been along for Michael’s amazing, world-record-breaking ride. Now we want to hear from our readers: What major goals have you accomplished, or records have you set? Please share your success stories with us in the comments below!

Congratulations Michael!!! Such an amazing achievement! You’re journey will no doubt inspire those of any age to achieve whatever goals they set for themselves

Great to hear there were llamas in his trip. Can’t imagine how long it would take me to get that distance. What an amazing man and team.

So incredible! I love the dedication and faith that both Michael and his team displayed throughout this epic journey!