Is Your Cleaning Spray Making You Sick? 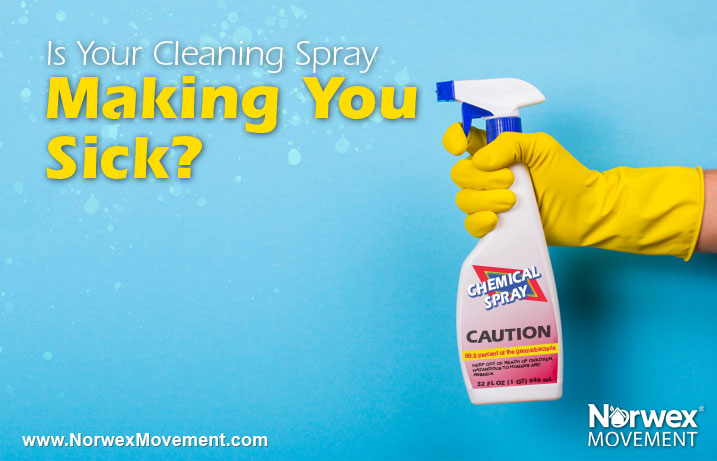 We had a sneaking suspicion. It turns out that cleaning—with chemicals that is—really may be bad for you! A recent study conducted by the University of Bergen in Norway and published in the American Thoracic Society’s American Journal of Respiratory and Critical Care Medicine showed that regular use of typical cleaning sprays by women can have as much health impact as smoking a pack of cigarettes a day!

More than 6,000 people with an average age of 34 at the beginning of the study were tracked by the Norwegian University over 20 years. Scientists there discovered a marked reduction over the course of the study in how much air women who used cleaning sprays were able to forcibly breathe out. The results were compared to participants’ answers to a questionnaire about how often they used cleaning products.

This decrease in lung function was more significant for women who worked as cleaners or had done household cleaning. Interestingly, men in the study didn’t show the same results.

Not only were cleaning sprays to blame for a decline in women’s lung function and a decrease in their lung capacity, they were also shown to be responsible for increased asthma rates among the women.

The Experts Speak Out

Professor Cecilie Svanes, the senior author of the study, said, “We feared that such chemicals, by steadily causing a little damage to the airways day after day, year after year, might accelerate the rate of lung function decline that occurs with age.”

“When you think of inhaling small particles from cleaning agents that are meant for cleaning the floor and not your lungs, maybe it is not so surprising after all,” said Øistein Svanes, a doctoral student who led the study.

Asthma UK’s Dr. Samantha Walker adds, “Cleaning products can be toxic for people with asthma as they often contain chemical compounds that can inflame the airways, leaving people prone to an asthma attack.”

The results follow a September 2017 study by French scientists that found nurses who used disinfectants to clean surfaces at least weekly had an up to 32% greater risk of developing chronic obstructive pulmonary disease (COPD).

The scientists conducting the study advised that cleaning sprays be avoided, actually suggesting the use of microfiber cloths and water instead.

(We at Norwex Movement would just add to that to always choose the best, highest-quality microfiber available on the market!)

Sarah MacFadyen of the British Lung Foundation has additional recommendations. “Ensuring we keep our homes well ventilated, using liquid cleaners instead of sprays and checking that our cookers and heaters are in good working order will help protect us and prevent everyday products impacting on our lungs,” she said.

While the results of the study were not surprising to us at Norwex Movement, many people still continue to rely on cleaning sprays that may contain harmful chemicals. What advice would you have for those who are reluctant to remove these products from their homes? Please share your thoughts in the comments below!

Great article! Wish it was more in depth.

My advice would be to use essential oils tonscent your Norwex Cloth and use diffusers to scent your home! I only use Young Living Oils!!!

Using just a microfibre Norwex cloth and water also simplifies the ‘stuff’ in the cleaning cupboard, after all, it is just a cloth and water! You can store that much easier than several other cloths and spray bottles full of chemical cleaners. Talk about money saved and less impact on our landfills and recycling companies too! And, what about the real “clean” that happens? No more residue left behind to smudge, streak or smear!

We are programmed to think “Clean” is supposed to smell like something. But really true clean has no scent. Essential oils can add a nice fragrance,but I have found that I no longer miss the “fragrance when I clean.”

Perhaps this study will spur the industry into developing better cleaners for those who have not heard of Norwex.

I always tell people, “Try it and see what you think!” We can’t make informed decisions without knowledge, and actually USING a microfiber cloth & water is a great hands-on way to teach people there is another option.

Great point, Tanya! Isn’t that the way we ALL learn, typically? By doing! Thanks for your comment!

You can Shelley, just hold ur finger on the text and then drag the highlight all the way to the end of article and u will see COPY pop up and touch copy and then Go to ur Facebook page and hold ur finger down on the spot u want to copy it to and PASTE will pop up. Hit paste and bam there is the article for u to post! More people need to be educated on toxic home chemicals!

Professor Dr Cecile Svanes of the University of Bergen in Norway explained: “While the short-term effects of cleaning chemicals on asthma are becoming increasingly well documented, we lack knowledge of the long-term impact. I tend to believe undocumented for scientific purposes doesn’t mean we don’t have enough first hand evidence of long term impact. As I get older and I think about all the cleaning chemicals and environmental contaminants I was exposed to throughout my life; I became convinced the neurological symptoms I experienced were aggravated whenever I would used chemical cleaning products. My symptoms miraculously and dramatically cleared up once I eliminated chemical cleaning products from my home. Just saying!