4 Botanical Repellents to Protect Against Insects 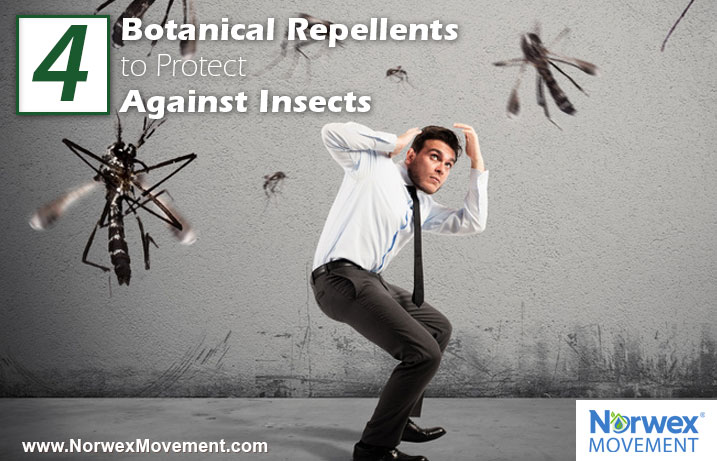 Sniffing Out the Best Insect Repellent

Budding trees, blossoming flowers and warmer temperatures are all signs that summer’s on the way. And when the insects start to buzz in, you know it’s official.

But while insects have important roles to play in their various eco systems, none of us particularly likes to get up close and personal with them—especially if we’re prone to getting bitten. So for many outdoor-loving families, bug sprays and repellents are among their summer staples.

Repellents are technically in the family of pesticides, but they aren’t designed to eliminate pests. Rather, a repellent simply makes people less attractive to pests. But what’s in those repellents, and why do some labels advise us to wash them off after we come back inside?

People generally do not realize the importance of studying how insects can smell. Insects have a very strong sense of smell that significantly affects how they interact with humans and crop plants. Anandasankar Ray, Associate Professor of Entomology, University of California, Riverside

One of the most common active ingredients in typical bug sprays is DEET, also known as N,N-diethyl-meta-toluamide, its chemical name. DEET was developed in 1946 for the U.S. Army and, like most repellents, works by making it difficult for insects to sniff us out. Today, more than 500 EPA-registered bug repellents lotions, liquids, sprays, towelettes and other products list DEET as their active ingredient, containing anywhere from 5% to 99% DEET. Some say DEET’s effects are more long-lasting than others (generally between two and ten hours, depending on the concentration) and that it is safe when used according to label directions. But others warn of potential effects.

According to Scientific American, for example, “Duke University pharmacologist Mohamed Abou-Donia, in studies on rats, found that frequent and prolonged DEET exposure led to diffuse brain cell death and behavioral changes, and concluded that humans should stay away from products containing it.” According to the article, another study showed that DEET caused rashes, numbness or burning of the lips, nausea, headache, skin irritation, difficulty concentrating and/or dizziness in 25% of the subjects.

Picaridin is another synthetic repellent that works to prevent mosquitoes and other insects from finding or recognizing their intended targets. Like DEET, picaridin doesn’t kill mosquitoes or other insects, it simply hinders their ability to detect us. Picaridin hasn’t been on the market for as long as DEET, so there are fewer studies showing its long-term effects. Picaridin protects for up to eight hours and has been shown to be moderately toxic to fish.

While “natural”doesn’t always necessarily mean “safe” or “effective,” some plant-based options have also been shown to offer some protection against biting insects. Among them are:

Always read and follow label directions when using any type of pesticide, including insect repellents.

Has your family suffered from mosquitoes or other types of biting insects? Let us know how you deal with pests like these in the comments below.

4 More Things You Should Avoid Bringing Into Your Home [Updated]

Mosquitos love me! I am interested in trying out some of these to see how well they repel them for me! I typically use lavender essential oil on the bites after I get them to help soothe the itch!! I also just got eaten alive by chiggers!! I have found that mixing coconut oil and lavender EO or also Tea Tree Oil together really helps with the itch as well!

Yikes, Sarah, it sounds like a variety of pests love you! If you do try some of these botanical repellants, we’d love to hear how they work for you. Good luck!

Haha yes it seems as if they do! I’ll try some of these!! I just started a summer garden and so I’m outside a lot!!

Always looking for a better solution than spraying down with chemicals.

One solution I’ve tried for Iowa’s biting gnats in the spring — fierce creatures — is Absorbine Jr …. the camphor must disguise the human smell and/or the CO2 out put. Another product made locally in small town Iowa (Columbus Junction) is called “Bug Soother” and it is DEET free — really works well and uses lemongrass as the primary repellent. Check it!

Great info! thanks for sharing, Maryellen!

I have learned many years ago that a natural patch for insects contained B1 vitamin. The adhesive part of the patch created a skin reaction, so we started taking B1 in spring before mosquitoes are evident. we take it throughout the season and saw how well it worked when others around us were swatting mosquitoes or spraying themselves and we had nothing bothering us 🙂

I grow citronella and lemongrass plants in pots on my porch to deter mosquitoes. We also use an essential oil repellent. We live in the country, so eliminating stagnant water on our property is our number one defense.

I am always looking for a better solution, but this is one area I still use the store bought insect repellant.

I almost NEVER get bit by mosquitos or ticks!! No idea why, but I seem to be immune! haha..