Saving the Planet One Ban at a Time 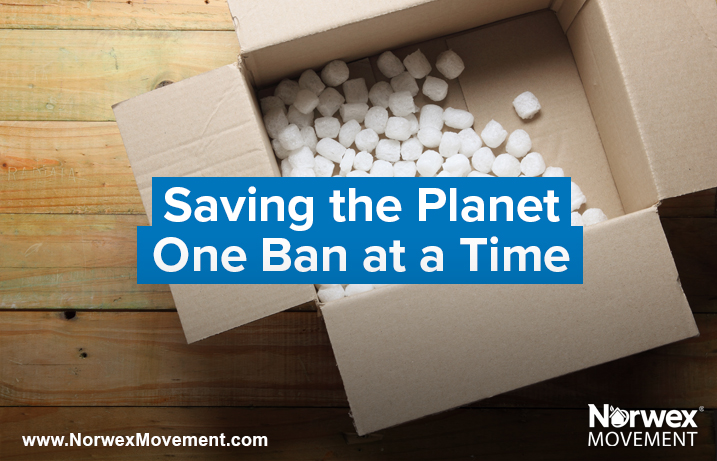 Could Maine’s Styrofoam Ban Help Save the World?

Strides are being made in the fight to protect our planet! Maine is becoming the first U.S. state to ban Sytrofoam® containers. On April 30, Governor Janet Mills signed the legislation that will take effect on January 1, 2021. While this new law doesn’t restrict the use of all forms of Styrofoam—just the use of food containers—it’s still a big step! For the next year, Maine restaurants will need to take the necessary steps to replace Styrofoam containers and move to better, more eco-friendly options. Though many have commented this could become a financial strain, the overall impact is a win for the environment and our planet’s future!

We’ve talked a little bit about the harm of Styrofoam and how it affects our environment here, but it’s important to remember just how problematic the use of Styrofoam is to our planet. Styrofoam, or polystyrene, is a plastic that cannot be recycled like other products. It can take decades to break down, meaning it sticks around longer causing harm to the environment. Many claim that it’s the most harmful form of pollution out there and has a larger impact on nature as a whole. Because it can’t break down easily, it often winds up in the oceans and being eaten by animals—causing even more problems! Styrofoam’s impact on the environment is definitely one that can’t be overlooked, and that’s why more and more people are taking action to get it banned.

While Maine is the first state to officially put this ban into action, other states are working on similar bans. Maryland’s legislature has passed a veto-proof bill also targeting Styrofoam food containers, while New York is moving toward a state-wide ban after approving one on single-use plastic bags. And, while entire states may not yet have bans in place, many cities and counties have banned the use of Styrofoam containers.
In addition, a Styrofoam alternative has been created by researchers. Made from nanocrystals of cellulose—which is a type of common plant material—this foam is made using water as a solvent, making it easier to break down.

Even companies like Igloo are looking into alternative options. With the launch of Recool, Igloo is providing its customers with a biodegradable and reusable cooler made from recycled paper and paraffin wax. It’s great to see such big companies make an effort to reduce their impact on the environment!

If you want to help reduce the use of Styrofoam, just keep a few things on hand when you go out to eat! Options include easy-to-clean reusable silicone containers to help limit your use of Styrofoam and other harmful products. Together, our meaningful choices can help keep our planet clean, safe and happy!

What are some things you are doing to cut down your use of Styrofoam? Let us know in the comments! And remember, if you’re not a Norwex Movement member, we’d love for you to join us today! Together, we’re learning to reduce harmful chemicals in our homes through small, conscious choices that help our families and our world.

I live in Maine! It has been a very easy transition… No reason not to do this everywhere!

That’s awesome! So glad to hear it

I do not purchase styrofoam anything, nor accept it for single use hot beverages.

I always bring glass containers to family gatherings. I send leftovers home with my nephew who is a bachelor.

Kim, thanks for sharing! I bet your nephew really appreciates it too!

I look forward to other states joining with Maine to ban styrofoam!

I hope all states catch on to this quickly! Sarah Luce is right….no reason not to do this everywhere!

Kentucky is currently working on passing a bill that would prohibit intentional balloon releases, ban plastic single-use bags and straws, AND ban Styrofoam food and beverage containers! We’re on our way!

Maybe restaurants could cut down on portion sizes and charge less! This would cut down on the need to take a container home. Or, in places where carryout is a big deal, use real glass/aluminum/silicone containers with the restaurants logos, when they get brought back for reuse the restaurant can provide a discount. Our local pie place, Kathy’s Pies, does this with the pie pans. If you bring the pie pan back for reuse, you get $1 off your pie/purchase. And, if not, you have a pie pan to use at home.

One doesn’t think about how problematic a take out container can be! I will definitely be making more of an effort to plan ahead when going out to eat.

A no styrofoam would be great!