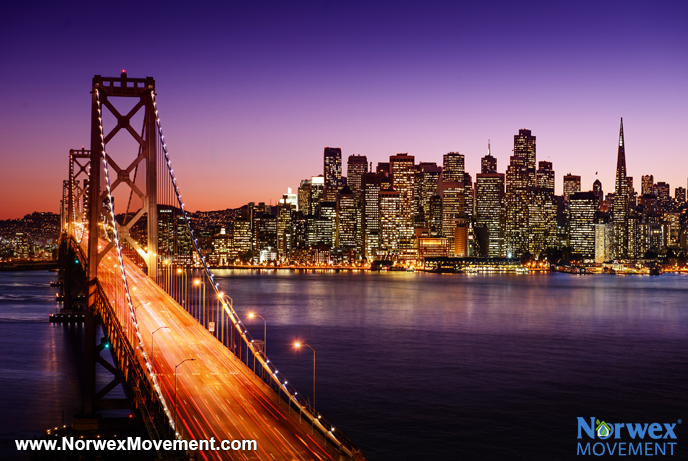 Known for its amazing contemporary art and culture, the world-famous Pier 39, as well as the iconic Golden Gate Bridge, San Francisco also happens to be one of the world’s greenest cities.

San Francisco has earned its eco-friendly reputation by promoting a greener lifestyle for its citizens while initiating innovative strategies to help protect the environment. One major environmental goal for San Francisco is to be completely waste-free by 2020, and the city’s efficient policies and programs are helping to make this goal a reality.

Here’s how San Francisco is keeping it green:

The Plastic Bag Ban
Single-use plastic shopping bags have long been an environmental scourge, crowding landfills, polluting our oceans and endangering helpless marine animals. And though several cities around the world have already implemented plastic bag bans, San Francisco was first American city to prohibit the use of plastic bags.

The city has also implemented the use of reusable bags and totes made from recycled materials. Because of this, San Francisco has been able to divert more than 1.6 million tons of waste from its landfills annually!

Effective Composting and Recycling Programs
Another reason that San Francisco is one of the greenest cities in the world is because of a city-wide ordinance passed in 2009 that requires all of its citizens to separate their compostable items and recyclable materials, while also engaging in composting and recycling practices. The ordinance was designed to help the city divert massive amounts of waste from overcrowded landfills and is a part of the plan to become waste-free by 2020.

Because most greenhouse gases associated with waste are a result of materials extraction, manufacture and transport, the initiative to completely divert all waste from landfills (and composting itself) is extremely eco-friendly and supports the city’s overall goal of significantly reducing greenhouse gas emissions.

Eco-Friendly Commuting
Because of the hilly terrain and how compact the city is, many citizens of San Francisco find the prospect of owning a car quite challenging. The silver lining, however, is that the city has the nation’s third highest rate (32%) of public transit usage by daily commuters, and has implemented regional bike-sharing programs that will help reduce harmful carbon emissions. In fact, commuting to work via bicycle has become such a popular method of transit in San Francisco that roughly 75,000 residents currently bike to work on a daily basis!

What do you think about this amazing eco-friendly city? Please feel free to share your thoughts in the comment section below – we’d love to hear from you!
Have you ever visited San Francisco?
Yes:
36%
No:
64%
Total Votes:
75
View Poll
Share this...

I think every city, suburb and town should start adopting these policies. What great ideas!!

I love that composting is required, not only does it take care of waste but it improves soil and plant (food) growth!

Fun fact… in the last 5 years, every time I got to San Francisco, someone steals from me / I get robbed. No joke! I have been about 8 times in the last 5 years, and each time something awesome happens: my car window got smashed and car contents stolen, someone grabbed and ran with my purse, someone stole my camera bag out of a coat check in, someone stole my coat off a chair and my favorite was when a bum grabbed money out of my hand then CHASED me! Fun times! <3