Out of Work Coal Miners Find a New Way to Flourish 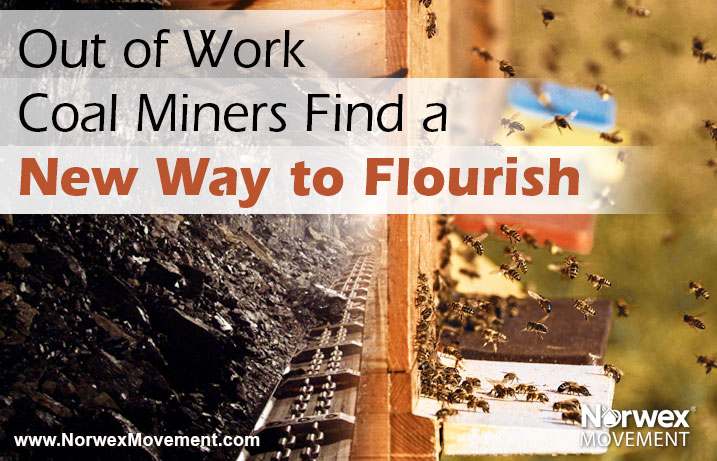 In the U.S. state of West Virginia, coal mining jobs used to be plentiful. Now? Not so much. Families dependent on coal mining for generations are now looking for new ways to make a living. And they’re finding some interesting lines of work.

Many former miners, and others whose jobs supported the mining industry, are being trained for such diverse jobs as healthcare technicians, construction workers, robotics technologists—and beekeepers.

Coal miners as beekeepers? Yes, it’s true. And they’re not only learning how to supplement their income, but they’re supporting the environment as well.

Appalachian Headwaters is the West Virginia nonprofit behind the idea. The organization was formed in 2016 to restore native hardwood forests and streams on former mining sites in central Appalachia. Now, their double goal is to both restore damaged ecosystems and create sustainable local jobs.

So they’re training people, including out-of-work miners, in the art and science of community beekeeping. And it couldn’t come at a better time.

Bees and other insects are responsible for pollinating not only fruits and vegetables but cotton, hemp and many trees too. Even meat and dairy industries rely on the power of pollinators to support the clover and alfalfa crops that feed their herds. But the decline of pollinators in recent years has many concerned.

Appalachian Headwaters’ Beekeeping Collective initially began as a way to support the land-restoration efforts, by ensuring that the area had plenty of pollinators to help establish flowers and trees. Now, by involving local experts to help train new beekeepers, this program has evolved into a way to also support West Virginians seeking supplemental income through sales of honey, wax and other bee byproducts.

In other words, it’s an economic and environmental win-win.

So just how much can a beekeeper expect to earn? Well, given that a strong beehive can produce 60 to 100 pounds of honey each season, and a pound of honey received an average retail price of $7.32 in 2018, a beekeeper with a single hive could conceivably make up to $732 per season. Multiply that by the 20 or so hives that some beekeepers maintain, and you get upwards of $15,000 per season. And with both a spring and a fall season, that can make a big difference for families and individuals.

Member beekeepers in the Appalachian Headwaters’ collective agree to follow a natural beekeeping protocol. Synthetic pesticides and antibiotics are never used, and member apiaries are located on land that hasn’t been treated with synthetic herbicides, pesticides or fungicides.

Have you ever thought about launching into a new career, or found an unexpected way to supplement income? We’d love to hear about it! Just drop us a line below.

Grads: You Can Make a Living Preserving the Planet
8 Comments
Inline Feedbacks
View all comments

I realize how important bees are. I personally cannot be a bee keeper; I’m allergic to their sting. A local beekeeper does have a hive on my 16 acres though. I just stay away from it. My hubby fills a water pan for them. Win, win, win!

It does, but thanks for pointing that out.

I think this is a fantastic article. Love hearing such positivity.

Would love to have bees but I do plant flowers but cant raise I am allergic to them!

What an amazing way that man and nature can come together for the benefit of all! This year I have dedicated a section of my backyard garden just for pollinator friendly plants!

Oh that’s wonderful, Jessica! Thanks for sharing about how you’re helping to take care of our pollinators!

I sadly wouldn’t be able to keep bees, my grandfather and my mom were allergic and while one bee sting didn’t have an adverse affect on me, I don’t want to find out about multiple ones. But I love bees and butterflies so I do what I can to help them and invite them into my garden. I plant high pollen flowers and also have large rocks in the flower beds for them to rest their weary wings.