Can Chocolate Really Make You Healthy, Smart and Gorgeous? 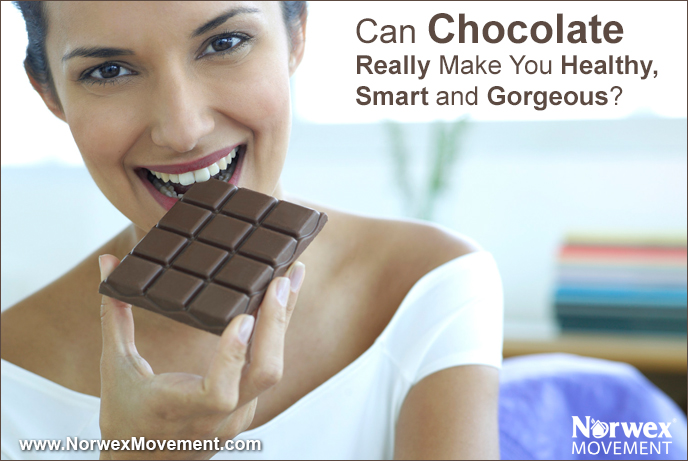 There’s good news for chocolate lovers! Several studies now link it to a host of health benefits. While the jury’s still out as to exactly how it works in our bodies, evidence shows that chocolate (or at least some of its cacao plant-based ingredients) is good for you!

Along with many other plant-based foods like cranberries, red wine, peanuts and tea, chocolate contains flavanols. What’s so great about flavanols? In addition to having antioxidant qualities, they have been shown to help: 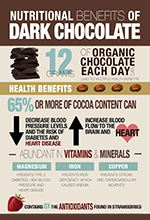 What’s more, a recent study by the University of Maine showed that the benefits of chocolate go even further. Cognitive scores of those who consumed chocolate at least once a week were found to be higher than those who rarely or never consumed it. In fact, habitual chocolate intake was shown to improve visual-spatial memory and organization, working memory, scanning and tracking, as well as abstract reasoning.

In addition, in a 2012 study of 90 elderly participants, researchers at the University of L’Aquila in Italy discovered that daily consumption of cocoa flavanols improved mild cognitive impairment, working memory, task-switching, verbal memory and the ability to relate visual stimuli to motor responses.

It’s Also Good for Your Skin

The good news keeps getting better! As we discussed in “5 Foods That Can Help Keep Your Skin Healthy,” studies have shown that long-term consumption of high-flavanol cocoa can even improve protection from harmful sunrays, increase blood flow to the skin, increase skin density and increase hydration in women.

Which kind of chocolate is best? The darker the chocolate, the less fat and sugar it usually contains. Depending on how it was processed, darker chocolate may also have more flavanols. Hint: when choosing cocoa powder, make sure that it hasn’t been treated with an alkalizing agent to neutralize its natural acidity and give it a milder taste—a technique known as Dutch processing.

Finally, a word to the wise: Any chocolate candy is likely to contain an excess of fat and sugar, so consume in moderation and don’t forget to exercise. Exercising at least three times a week for 30 minutes a day is much better for brain health than consuming any amount of flavonoids, according to Dr. Sam Gandy, at Mount Sinai School of Medicine in New York. 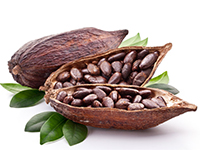 We love these ideas for getting more cocoa in your diet, from Connie Diekman, RD:

Make brownies from scratch with cocoa and use oil instead of butter. Add cocoa powder to a banana-and-peanut-butter yogurt smoothie. Use cocoa powder and sweetener for chocolate milk.

Do you love chocolate as much as we do? We’d love to hear from you! Just leave a comment below.

What You Need to Know About Your Favorite Snack Foods

This is my kind of article! I shall have to try to go for the darker chocolate though. How do you know if it’s been treated with an alkalising agent? Will it say on the packaging?

Hi Linda, yes. Look on the label and it will probably say “Dutched” or “Dutch process” chocolate if it has undergone the alkalization process. Please note that many prefer the flavor of Dutched chocolate, and there’s nothing wrong with it. My understanding is that chocolate that has undergone this process has a milder, more mellow flavor. However, I’ve also read that the process of alkalization may reduce the antioxidant levels of the chocolate somewhat.

Just had to go and eat a bit of 81% dark chocolate after reading this!

I loooove dark chocolate! So glad it might have health benefits! I’d still eat it even if it didnt 🙂

I wish I liked chocolate a little less lol

Yummy! I enjoy my dark chocolate! 🙂 I’m glad to read an article that talks about the benefits of chocolate. 🙂

I’ve switched to almost entirely dark chocolate in our family’s baking–I love the richer flavor it gives, and having health benefits is definitely a bonus!

Wow. I am printing this article for my doctor for my next physical. So exciting lol.

Yup – love my 2 or 3 squares of 80% Dark Chocolate with my greek yogurt and organic blueberries, every night. Actually, time for that right now!!

Not a huge fan of chocolate, but I do use organic cacao, and cacao nibs in my smoothies and desserts!