Keeping Our Waterways Clean: How You Can Help 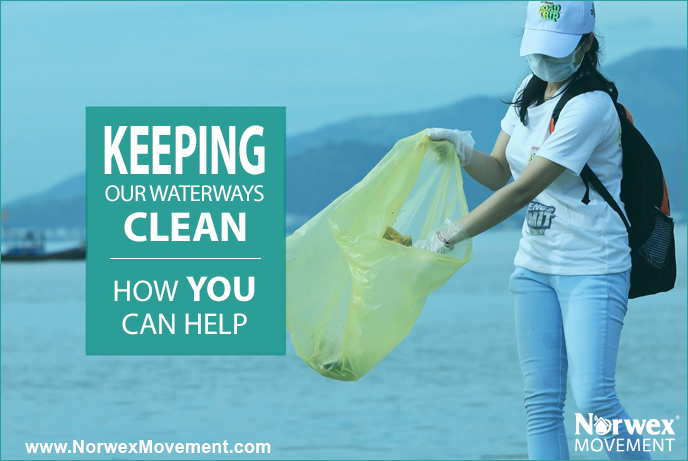 Good News on the Water Front

As we mentioned earlier this year in Experts Warn of More Plastic than Fish in the Sea, the world’s waterways are getting a reputation for becoming rather “trashy.” And it’s a huge problem for a variety of reasons.

As just one example, marine animals like sea birds and turtles often mistake floating debris for food. Some, like these Laysan albatrosses on the Midway Atoll, accidentally pick it up as they skim the water with their beaks. And smaller sea creatures can also be fooled by disintegrating plastic, mistaking it for plankton.

We Can All Do Something
However, there’s a lot we can do as individuals to help stem the rising tide of plastic in our waterways. Simply cutting back on the amount of plastic we use every day is a good start.

A Trashcan for Our Waterways

And some corporations are also focused on the problem of marine debris. For example, The Seabin Project uses an ingenious bucket-and-pump technology to create an automated “trashcan” that works in the water to remove floating trash, plastics and other debris—even oil, detergents and fuel. Designed for smaller bodies of water, like in marinas, ports, yacht clubs, lakes and rivers, the Seabin catches pollution in a natural fiber bag from which the water is sucked out and then pumped back into the water.

A Dumpster for the Pacific Garbage Patch

And ocean-cleaning on a grander scale is also underway through the efforts of The Ocean Cleanup, a Dutch foundation developing advanced technologies to rid the world’s oceans of plastic. Currently the company is testing a smaller version of a floating barrier that will rely on winds, waves and currents to passively capture plastic pollution in the ocean. By 2020 it hopes to deploy its full-scale system between California and Hawaii. According to its website, “One passive system could theoretically remove about half the Great Pacific Garbage Patch in 10 years.” That sounds like great news to us!

We applaud the young entrepreneurs heading these companies for their creative ideas and basic stick-to-it-iveness. How about you? How do you lead the charge within your own sphere of influence when it comes to keeping our waterways free of plastic and other debris? Just leave us a comment below!

How awful to think that there are more plastic products in the ocean than there are animals. Just makes you think what you are eating when you eat seafood.

I was just blown away by the beautiful Washed Ashore project that was unveiled at conference…the salmon was gorgeous!! I’ve seen pictures on here and on the web site, but seeing it in person is just mind boggling. I’m proud to be part of a company that supports efforts like this. With groups like Washed Ashore, Ocean Cleanup and others along with individuals who are making efforts, we can turn those numbers around!!

It’s so hard to eliminate plastic from our lives, but it’s worth it.
Focus on the big picture!
I’m trying harder than ever before.

Thanks for all you’re doing, Juliane!

This is another small business dedicated to taking all that plastic and making something great out of it that will benefit communities! https://www.indiegogo.com/projects/transforming-plastic-to-save-our-planet#/

What a delight to hear of the younger generation making it their goal to help improve our environment for future generations!

I grew up going to our place on the Gulf coast. It makes my heart so heavy to see the increase of garbage left by visitors on the public beaches there. Now we take two bucket with us when we walk: 1 for shells, 2 for trash. I hate that we have to do it, but someone’s gotta pick up what others left behind if I want to see this beach the rest of my life.

I live in a very rural area. My kiddos and I walk a 1 mile stretch to my mom’s house and pick up both sides of the road. We did this about 6 weeks ago, and today it looks awful again :(. It’s truly sad how much people throw out and don’t think a thing about it. Washedashore.org is awesome for our waterways! We need something like alongtheroad.org or something of the same idea for our roadways.

I love this idea. I strongly feel if everyone would help pick up trash when they are traveling the world it would help out.

I love this! I remember when I was a kid, my parents took me to a beach cleanup event, and I saw at a young age what had washed up on shore.. it was eye opening!