5 Reasons To Be Batty about Bats 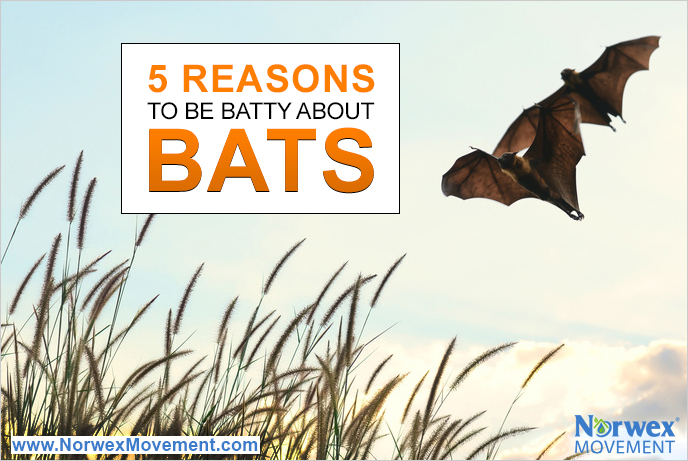 Cartoon bats can make great decorations during the month of October when Halloween is on everyone’s mind, but the truth is bats aren’t scary at all. In fact, bats are pretty amazing creatures that keep our ecosystem in check.

What’s truly frightening is the alarming rate at which we’re losing large bat populations due to White-Nose Syndrome (WNS). WNS is a relatively new disease marked by a fuzzy white fungus that grows on the nose, ears and wings of bats. It’s currently spread in the U.S. and Canada and affects bats while they’re hibernating in caves and mines. Scientists have estimated that we’ve already lost 6.7 million bats to WNS.

In honor of these little creatures in danger, we’re sharing the top 5 reasons to be batty about bats.

Florida researchers have begun installing more bat boxes in an effort to lower the mosquito population and combat agricultural pests. Some species of bats are known to eat over 80 different kinds of insects, making bats a natural alternative to harmful pesticides.

Bat Droppings Can Be Used as Fertilizer

Known as guano, the droppings from insect- and fruit-eating bats has been used for years to enrich soil. Some gardeners prefer guano as a fertilizer because it’s fast-acting and has very little odor. Unlike some chemical-laden fertilizers, guano is natural so it’s good for the environment.

Large expanses of our world’s rainforests are stripped each year for logging, agriculture or other reasons, leaving enormous areas cleared. These areas are restored each year, in large part due to bats and their ability to disperse seeds. According to Bat Conservation International, “Seeds dropped by bats can account for up to 95 percent of the first new growth.”

Tequila is a spirit made from fermenting the base of blue agave plants, which have flowers and nectar that bats love. As they move and drink from agave plant flowers, bats cross-pollinate and help the plant reproduce. Agave plants rely solely on pollinating bats in order to reproduce.

Now that you know how bats help out our ecosystem, here are a few ways you can help ensure our beloved bats remain protected:

Here is a video full of fun facts about bats:

Would you consider using bat guano as fertilizer in your garden? Share your thoughts with other gardeners in a comment below!
Would you ever install a bat box in your yard to combat insects?
Yes:
71%
No:
29%
Total Votes:
117
View Poll

We have frequent bat visitors at the church where I work. Pest control is not allowed to do anything about them as they are endangered. This post has given me an idea! Perhaps we should build a house for them and they won’t bother trying to get inside. Often, they can’t find their way back put and end up dying.

So sad Linda, I hope they embrace your bat house idea!!

I love this idea. Bats rock

We already have bat houses installed and our mosquito population is way less. Save the BATS!

I love bats!!! I have always told my husband that I want bat houses but we live in the cities and don’t have a good place to put them right now. We are working on it though. Bats are great creatures. Thanks for the wonderful post about all the great things bats do for us! (Especially love the tequila info)

I would love to try installing a bat house! Also love the idea of using guano. Such helpful information!! Thank you!!

Yes, I would use bat guano as fertilizer in my garden. How does one gather it… or where can one get it?

What a great article lots of great information.

We have so many bats we are wanting to make a bat box!! They are really great to have around your home for all the reason in this post!

Thanks, April! We’d love to hear about it, if you decide to make a bat box!

Bats eat 10 times their weight in Mosquitoes!! Curious as too why that is not mentioned??

I love the idea of a bat box! Now I just have to figure out where to get one. :-

We have one. Just waiting on them to be used.

I would use guano as fertilizer. Such a great idea. So how would it be collected?

We are going to be building bat boxes for out backyard with our kids as a homeschool project this spring! The girls got OBSESSED with bats over Halloween! We have been watching bat videos on YouTube for the past few weeks, haha!

I would love to fertilize my garden with free guano. I bought worm castings last year for $100/50lbs. Send me the bats!!! I have put up bat houses and didn’t seem to attract them.