Not Just a Lot of Air: 8 Reasons Wind Energy Is on the Rise 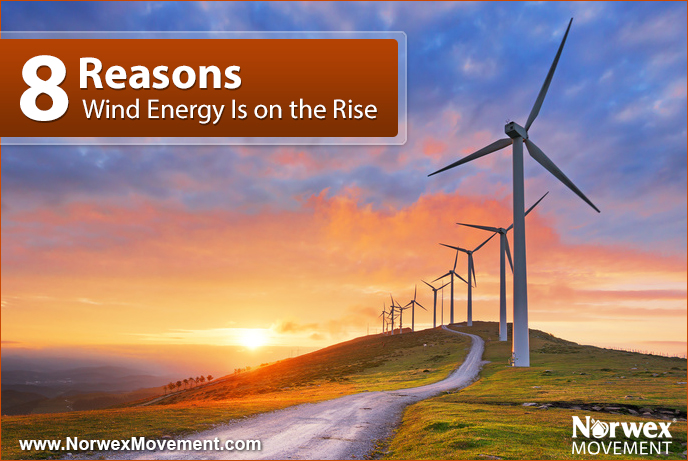 He shouts in the sails of the ships at sea,
He steals the down from the honeybee,
He makes the forest trees rustle and sing,
He twirls my kite till it breaks its string.
Laughing, dancing, sunny wind,
Whistling, howling, rainy wind,
North, South, East and West,
Each is the wind I like the best.

From “Wind”
by Amy Lowell

Our Friend, the Wind

Global Wind Day is tomorrow, June 15, so today we celebrate the mighty power of our friend, the wind!

The power of the wind has been harnessed for thousands of years to grind grain and pump water. However, it wasn’t until the late 1800s that its power to generate electricity was put to work.

Throughout the 1900s, small wind stations began to pop up on local farms and homes. Then came larger, utility-scale wind generators, which were connected to electricity grids for remote use. By 2015, the U.S. was producing over 190 million megawatt-hours (MWh) of wind power, generating enough electricity for more than 17 million typical U.S. homes.

What Makes Wind Power So Popular?

For more than a century, the popularity of using wind power to produce electricity has been on the rise. And it’s easy to see why—wind power offers a variety of benefits.

Sustainability: Wind is a result of the sun’s heating of the atmosphere, the Earth’s rotation as well as its surface irregularities. So as long as the sun shines and the Earth rotates, the wind will blow—and its energy can be harnessed for our use.

Resource Conservation: Since there’s nothing to mine, there’s also no need for fuel to transport and process wind. And wind energy conserves water resources, too. For example, it can take about 600 times more water to produce the same amount of electricity using nuclear power than by using wind power, and about 500 times more water using coal power versus wind.

Land Preservation: Wind farms cover a large geographic area, but each turbine uses only a small portion of the land. This results in a very small impact on both livestock grazing as well as crop production.

Economic Benefit: Because wind turbines can be located on existing farms and ranches, the rural economy is also boosted. Farmers and ranchers receive rent payments from wind power plant owners for the use of their land, providing them with an additional income stream.

Cost-effectiveness: Since wind is a native fuel with no associated mining or transportation costs, it’s also one of today’s lowest-priced renewable energy technologies. According to windustry.org, wind-generated electricity cost only about 2.5 – 5¢ per kWh in January 2015, as compared to nearly 40¢ per kWh in the early 1980s.

Job Creation: From construction to maintenance and upkeep, wind farm development creates jobs. The Wind Vision Report stated that, by 2050, wind could support more than 600,000 jobs in manufacturing, installation, maintenance and supporting services.

Though it’s currently not practical to rely on the wind for 100% of our global energy needs, its many benefits make it an attractive supplement to fossil fuels and other sources of energy.

In support of our mission of reducing chemicals and plastics in the environment, Norwex Movement wishes you a happy Global Wind Day!

What are your thoughts on harnessing the wind as a source of energy? We’d love to hear from you—just leave a comment below.

When You Think About Recycling, Do You Include Your Electronics?
5 Comments
Inline Feedbacks
View all comments

I love seeing the turbines going! We travel from one side of our state to the other a few times a year and there is a very large wind farm on the way. I love watching the turbines turn and know that it is a natural source of energy!

I have stopped at a local wind farm. But reading this article really puts it all in to perspective! I would love to have one on my mountain property! Think of the energy we would save.

Our county recently put up a wind farm, I couldn’t believe the resistance people were putting up. I still don’t know why you wouldn’t want wind farms. seems a lot les invasive than oil drilling or fracking??

I love harvesting wind energy. I think it is a great idea.

There are some wind farms within easy driving distance of my home.. neat stuff!!