How to Turn a Floodplain into a Breathtaking Spectacle 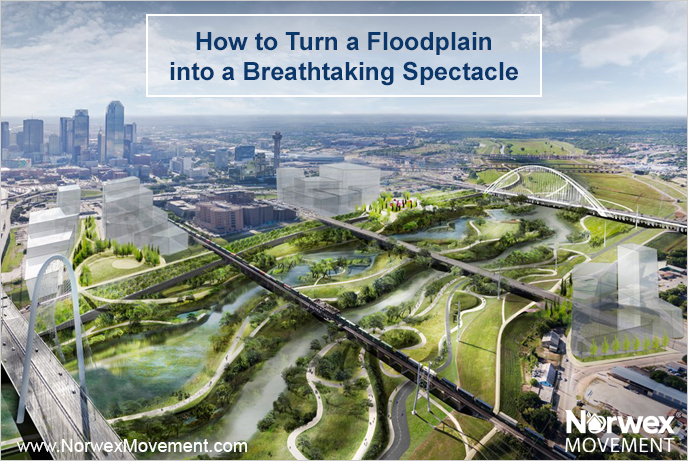 New Nature District in the Heart of Dallas

If you ever visit the Lone Star State you’ll almost certainly hear someone brag, “Everything’s bigger in Texas!” Well, as we also like to say here, “It’s not bragging if it’s true!”

How do you manage a natural floodplain in the heart of a metropolis?

While Dallas’s Trinity River has provided the city with a crucial resource for more than a hundred years, the river has also been a powerful force of nature. Because it floods frequently, the land on either side of it, beautiful though it is, has remained largely inaccessible and therefore undeveloped.

New vision for an old problem

Dallas city managers have long recognized the area’s potential as a natural backdrop for parks, playgrounds, plazas and pathways. So recently, they teamed up with a design firm and government engineers to formulate a plan to create the city’s new “Nature District.” This three-part project will encompass a whopping 10,000 acres (about 15.6 square miles or 40.5 square kilometers), 7000 of which are part of the Great Trinity Forest.

Other features of the Dallas Nature District will include:

A major goal of the project is to ensure the infrastructural soundness of the floodplain. The underlying idea is that the park will transform a flood event “from a natural disaster into a breathtaking spectacle.”

While the completion of the entire project is still years away, a trail-style bike path is on schedule to be finished by summer 2017.

And while Dallas’s Nature District will indeed be big, Texas can’t claim bragging rights for the largest urban park in North America. A few are even bigger, including Canada’s Rouge Park, which will soon become that country’s first national urban park with more than 19,500 acres, or 79 square kilometers!

Popular Urban Parks Around the World

Whether it’s strolling through the park or just gazing up at the sky for a few minutes, enjoying some fresh air and sunshine can really lift the spirits. What’s your favorite way to enjoy nature? We’d love to hear from you. Just leave us a comment below.

Why Use Microbeads When There Are Better Alternatives?
9 Comments
Inline Feedbacks
View all comments

What a brilliant project! It makes me so happy to see people committed to ensuring we keep green spaces in urban environments. We have a beautiful waterfront in Louisville, and a matching one in Indiana on the opposite side of the Ohio. I appreciate the wooded trails, outdoor concerts and free entertainment for the children.

Our family loves to hike together! In all seasons – we watch for bugs, identify trees, hike for exercise or pleasure! It always leaves us invigorated and rejuvenated! I love that we are instilling in our children a sense of awe and wonder at the natural world

We completely agree, Sadiemae! And your children will have these memories to cherish throughout their lives!

What a wonderful plan! I look forward to coming back to Dallas for a future Leadership Conference and visiting the park!

I love going for a walk on local trails.

Urban parks are a blast!! I especially love the one in Chicago.. that Bean sculpture is a trip!