For the 2014 Norwex North American Conference, I continued with my Chemicals of Concern series, addressing the environmental hazards of plastics, triclosan and SLS. 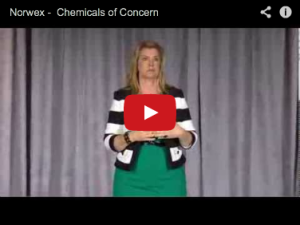 Some excerpts from this presentation.

Triclosan is an antibacterial and also an antifungal agent. It’s found in more than 2000 hand and body soaps. The Food and Drug Administration has found evidence that people using anti bacterial products were not any healthier than the people not using them and the products with the triclosan were no more effective than just using plain old soap and water. The American Medical Association has recommended that triclosan not be used in the home at all as it may encourage bacterial resistance to antibiotics.

See the video for lots of great facts and tips on how to make your home safer and your life healthier.